The Importance of a Magnetic Plug Program

Welcome, let me introduce myself, my name is Terry Lewis and I am currently the Queensland Operations Supervisor/Manager for Techenomics Australia which I have been for the past 3 years. I have worked for the company for the past 6 years starting out as a Field Technician in The Hunter Valley NSW, servicing various mines, in Oil Sample Extraction, Pumping Grease, I have also spent some time working in our Lab in Singleton.

Having worked in the transport Industry for many years I know the importance of keeping machinery reliable and working, so the opportunity to work in this field was very exciting to me and still is today as I see the benefits of the work we carry out on a daily basis.

When I took on the job in Queensland, the main focus for my work has been the magnetic plugs and as they say a picture is worth a thousand words. Over the last few years I have worked with BMA Blackwater to develop a better program and system of reporting, which you will see further on. Since I took over this role I have come across a large number of magnetic plugs that if otherwise had gone unchecked, would have cost the company tens of thousands of dollars - not just in failed components but also in lost production time. Instead, the discovery of these contaminated plugs allow for the planners to schedule work to be carried out on the particular component which is illustrated below. 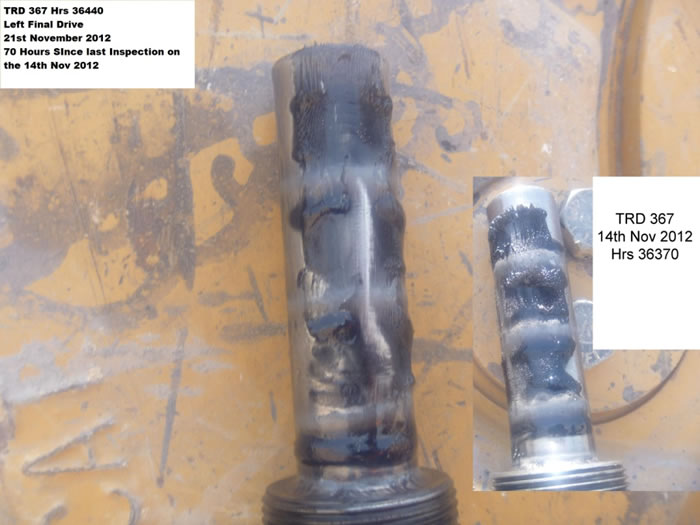 As you can see in the above photo, this particular plug has quite a lot of sludge build up with some signs of fine metal in the sludge. With this type of occurrence a simple flush and refill of clean oil could solve the problem. If after the flush, the problem keeps reccurring then they can look deeper into the problem. If it is just a build up of sludge from dirty oil then oil analysis is not really going to be of much help. which is why the Plug Inspections and the recommendations given are vital. Something that seems bad may very well turn out to be an easy, cost effective solution. This is of course the lower end of the scale, and failures can occur at any time as I will explain as we move along.

Some of the findings on the plugs are simply a build up of sludge which comes from just topping up oil levels and not actually flushing the component out prior to refilling with new oil. Residue builds up at the bottom of the component and simply mixes back in the fresh oil resulting in the fine metal getting into places where they continually scratch the surfaces of the internal components, wearing them down unnecessarily and causing other problems such as loss of tension or grip due to pits being created on the surfaces. Now some would think this a minor problem and write it off as wear and tear on components though you would be surprised at how quickly these small problems can escalate and you have major failures occurring, causing downtime and loss of production time. All of this at the end of the day means money.

So vital programs such as the Mag Plug Inspection Program carried out on a weekly basis can in fact save more than just a few hours downtime. Planned work can be scheduled, meaning you have your machines working when they are supposed to be working, rather than sitting in a workshop awaiting new parts.

To give you an idea of how quickly things can go wrong (and keep in mind we conduct weekly inspections on all mobile equipment) the following photos are in monthly blocks. 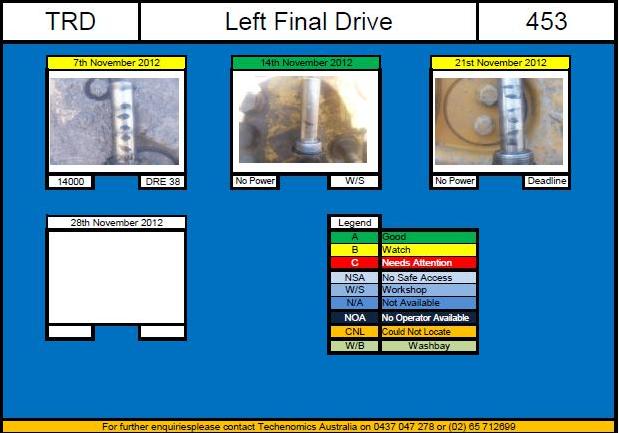 The above report shows that on the first monthly inspection there is a slight build up of sludge on the plug which has been marked as a B - in other words we continue to monitor, the second inspection shows the plug as being clean where the Dozer has gone into the workshop for a service or other work the oil has been drained and the plug wiped clean. This is how Techenomics Technicians found the plug. Moving onto the next inspection you will see how the build up has returned but if you take notice of the location, it appears the Dozer has left the workshop and has been parked up on the deadline so has not travelled very far for the sludge to reappear.

This indicates that if the machine was sent back to work, within a week the build up would be quite substantial and possibly having to return to the workshop, once again costing not only money but loss of production time.

The next illustration shows how much can build up on a weekly basis. 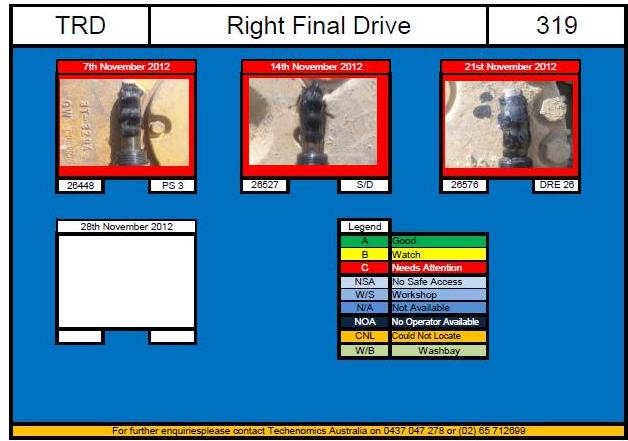 Remember these plugs are wiped completely clean after each inspection so if you imagine that no checks were carried the amount of metal and sludge that would be on this plug. There may be a new Drive ordered for this Dozer so until the arrival they may be keeping this dozer working or it may be near the end of its working life. With this type of reporting the planners can keep an eye on the final drive and, if necessary, park the machine until the new drive arrives.

Then we come to a couple of cases where you can see where failure is starting to begin in the space of a week between inspections. 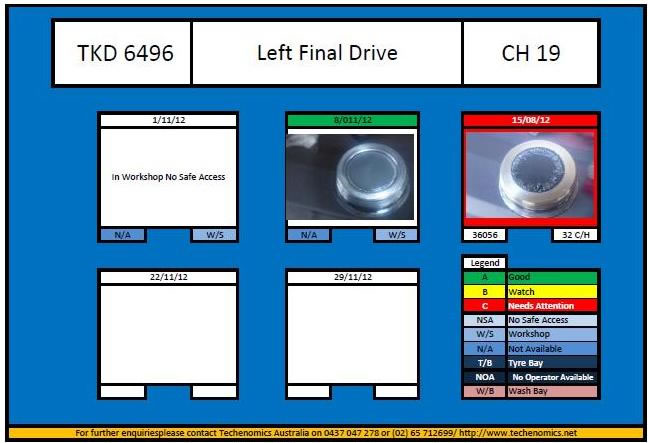 You can see in the course of a week the residue that has built up on this plug. Keep in mind that if the weekly inspections were not carried out, these plugs would normally only be removed by service personal out in the field to top levels, and would not be wiped cleaned. The only other time these plugs would be removed and checked is at a 500 hr inspection where the condition is written down on a service sheet - no photos would be taken or other records kept. As you can see by the above reports, Techenomics supply information such as hours, Location and Date are recorded along with a photo of the plug each week. Along with our Blue Oceans Program these serve as vital tools to predict failure or extend the life of the component.

More Extreme cases are illustrated below… 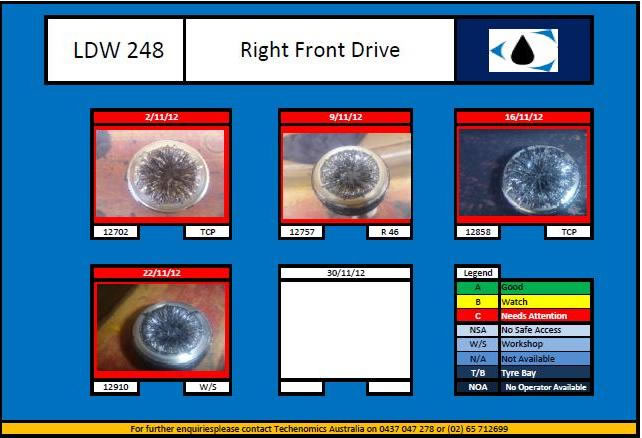 The above inspection is from a Letourneau Loader, this has been an ongoing problem with nobody knowing the answer, the component has been pulled apart with no apparent wear on parts. One of the reasons this is happening may be that because this is an electric drive loader that perhaps the wheels were not synchronised correctly, or tramming the loader over distances it was not designed to do. They are currently building a new drive for this Machine which will then be interesting to see if the problem returns. Though without these inspections this may have unnoticed and once again remember these plugs are cleaned on a weekly basis so picture what the plug would look like after say 500 hours. Not very pretty.

Other examples found during our weekly Inspections… 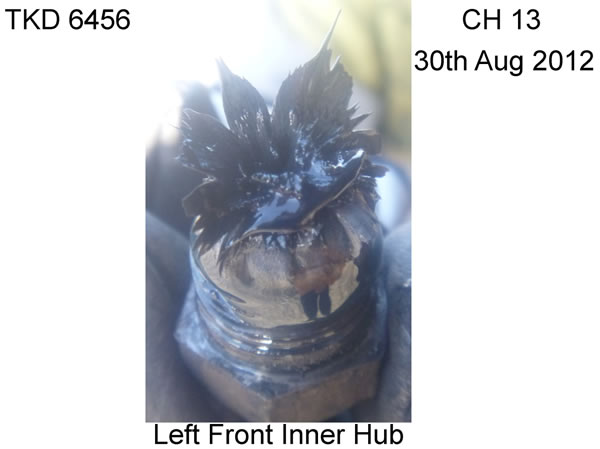 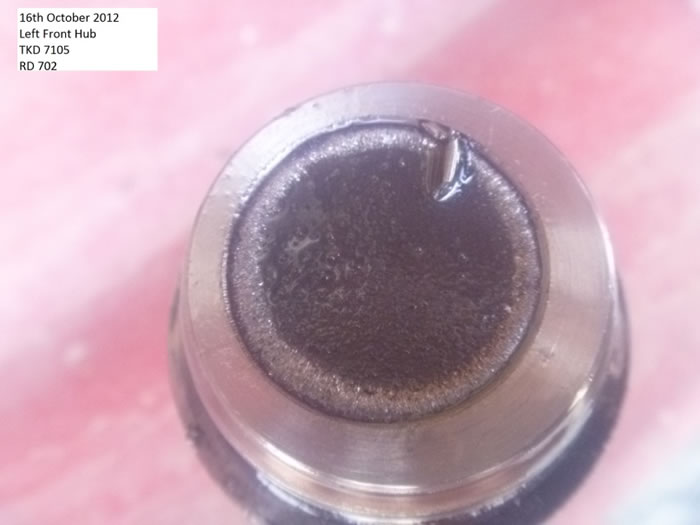 The above photo shows a small piece of metal on the plug with residue on the outer. The small piece was actually a piece of bearing inside the component that was about to collapse Techenomics Technicians reported this and the Machine was brought in for repair and sent back out to work. Gone unnoticed and the machine may have been stuck out in the field until such times as they were able to tow it into the workshop. 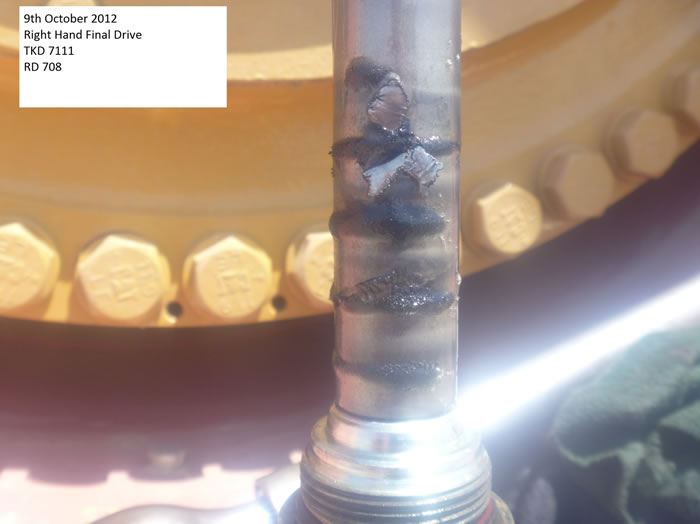 As you can see by the above photos The Magnetic Plug Program conducted by Techenomics is a vital part of any Preventative Maintenance Program. The reports along with the photos and Blue Oceans analysis data collectively allow any planning office to schedule work on their machines to prevent failure in the field which not only saves cost it saves lost production time and is also a safety measure by not having a machine fail  when you least expect it to.