Mine operations in Australia and Indonesia benefit from lower iron levels

The accumulation of iron in lubricants is of concern to equipment operators as it reduces the effectiveness of the lubricant and may indicate accelerating engine wear thereby reducing productivity, increasing maintenance costs and if left unattended could result in equipment breakdown or catastrophic failure.

Use of Liquid Tungsten in lubricants alleviates this by forming a barrier between metal surfaces, reducing friction and lowering operating temperatures.

This is not just hot air as Techenomics, which distributes Liquid Tungsten throughout its network and exclusively to the mining industry, is demonstrating both in laboratory tests and trials in the field.

Concerned by the excessive amounts of iron being generated in the engines of their haul trucks, operators in Indonesia and Australia approached Techenomics to help find a solution. In both instances a trial of the use of Liquid Tungsten in the Hitachi haul trucks proved successful.

In Western Australia the operator was seeking to reduce the iron wear rate by a minimum of 10%. The use of Liquid Tungsten was trialled in one truck, a Hitachi AH500 articulated dump truck, while a similar truck, a Bell B50D, served as the control vehicle with no Liquid Tungsten added.
Delvac 10W/40 oil was used in both trucks and the trial truck was dosed with 5% Liquid Tungsten.

At the beginning of the trial the control truck was generating iron at 0.06 mg/l/oil hour and there was little difference to the rate over the period of the trial.

A trial of Liquid Tungsten was also carried out on a Euclid Hitachi dump truck for a large mining operation in Indonesia, with the operator concerned at the high level of engine wear in the final drive.

After the addition of Liquid Tungsten the iron rate was reduced from 0.19 mg/l/oil hour to just 0.10 mg/l/oil hour, representing an impressive 47%. 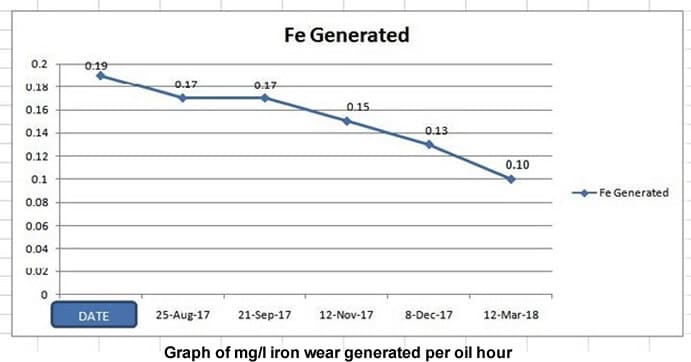 Techenomics CEO Chris Adsett says the Liquid Tungsten nanoparticles have a big role to play in optimising operations, including the massive haul trucks used in mining, wherever in the world the mine is located.

He says the ability of Liquid Tungsten to reduce friction and lower operating temperatures also reduces mechanical wear, increases the life of lubricants, lowers fuel consumption, limits maintenance and cuts emissions in the operating components of engines and other mechanical equipment.

Trials by Techenomics on haul trucks in Australia, Indonesia and Mongolia have demonstrated the effectiveness of the technology while trials by the Liquid Tungsten developer, US-based Nanotech Industrial Solutions (NIS), have proven the capabilities at operations in Russia and Canada.