Trials for a NSW council resulted in energy savings of around 15% as well as increased oil life.
The use of Liquid Tungsten in the gearbox oil of water treatment plant aerators has enabled a local government authority on the New South Wales South Coast to achieve energy savings of up to almost 15 per cent.
The Shire Council was concerned about the high cost of energy used to drive the aerators, which play an important role in the daily treatment of 9.5 million litres of effluent at a plant servicing towns in the shire area.

Council approached Techenomics, which distributes the Liquid Tungsten, to help find a solution to the high energy costs. It was decided to trial the addition of 8 per cent Liquid Tungsten on two aerator units at one of the shire’s five water treatment plants.

Each aerator holds about 30 litres of gear oil and during the trial period in aerator 1 there was 6.53 kilowatts saved, representing an annual saving of 32,509 kW over a year with estimated total annual cost saving of $4,876 at a conservative average cost of 15 cents/kWh. 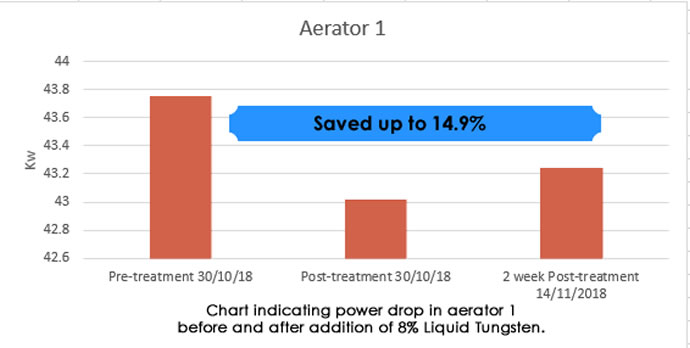 The saving in aerator 2 was 6.26 kW representing the saving of 31,085 kW over 12 months with an estimated saving of $4,662. As well as reducing energy use by around 32,000 kWh per annum for each aerator, the trial has also resulted in oil life extensions and further cost savings for the council.

“With 25 aerators at the Shire’s water treatment plants, this represents a saving that is not to be sneezed at,” Techenomics CEO Chris Adsett said, “and it would be no surprise if the council decided to use Liquid Tungsten in all aerators.”

“In other words, we can set secondary limits that are based on wear metal generation rather just an absolute value across the total fleet.

“We can set secondary limits that are based on wear metal generation rather just an absolute value across your total fleet.

He added: “Techenomics has shown time and time again in laboratory testing and in-field trials in a range of transport, mining, marine and industrial situations, in fact anywhere that lubricants are used to facilitate mechanical operations, that Liquid Tungsten really does ‘walk the walk’.”