Women at the helm of Techenomics’ laboratories

Women at the helm of Techenomics’ laboratories

While women account for about 50 per cent of Techenomics’ workforce and occupy a number of technical, research, administrative and supervisory roles, it is the laboratories where their skills, creativity, dedication, diplomacy and experience are at the fore.

Established and new laboratories in Indonesia, Australia and Mongolia are managed by women.

In Australia, women have been associated with the business since it started around 30 years ago and continue to assist in the development and growth through a new operation in Newman, serving the large mining industry of the Pilbara region in Western Australia. 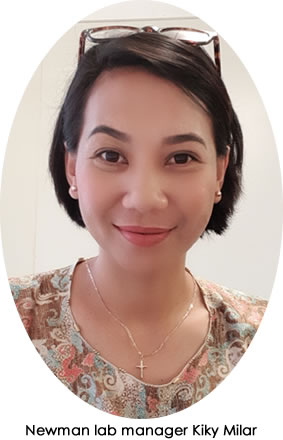 At the laboratory in Newman, Kiky Millar, a recent arrival in the mining town from another large mining service centre in Balikpapan, is lab manager. Kiky relocated with her husband, who has work in the Pilbara with BHP, and two young children, and brings more than six years previous laboratory experience as well as skills obtained while completing a Bachelor Degree in Chemistry as well as a Masters Degree in Environmental Science.

Assisting Kiki in the new laboratory will be a female chemical engineer, also from Indonesia, along with Keshini Lokhun, a young Science Graduate specialising in chemistry, who is also helping Techenomics establish a presence in parts of Africa with her French language skills.

Kiki says women are playing an increasing role in the male-dominated mining industry, including in places like Newman, and particularly in technical and scientific areas. She says that women are now much better accepted and there are more opportunities. “If women are to gain more equality in the industry, they have to be treated equally and must also treat all others as equal.”

At the Newcastle facility the company’s development and research work in Australia has been well-served in recent times by the expertise of lab manager Sahar Nazari, who has now started maternity leave. 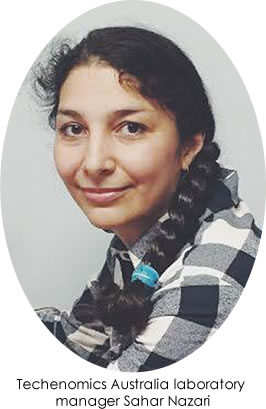 Techenomics’ CEO Chris Adsett said: “I would like to publicly thank her for her considerable efforts and the progress made and I wish her well. We would also be happy to see her return after her maternity break.”

Techenomics also has two laboratory managers in Indonesia - Ita Saronika Bulang and Erna Wahyuningsi. Sangatta lab manager Erna has been with the company since it began in Indonesia more than 23 years ago. She says an important part of her role is gaining the trust of clients and then maintaining the trust so that they are always happy.

“Women are multi-talented and provide many advantages for Techenomics, including creating a more comfortable work environment. Women tend to be more expressive – we are better able to express what we feel.”

Erna says that the right and left sides of the brain have different ways of working with the left used more for logic and problem solving while the right is more creative. Men tend to use the left side more while women are better able to use both sides. “Men tend to place more importance on logic, while women are more creative and expressive in solving problems which means they are increasingly being accepted by society with their ability to balance between left and right sides.” 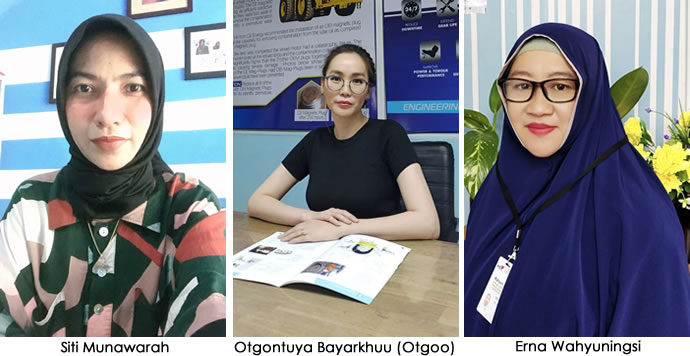 She is a strong believer in teamwork its effectiveness and sees herself as being part of a team in the laboratory as well as in the broader company.

Mongolian lab manager is Otgontuya Bayarkhuu (Otgoo) who has been with the company since 2015 and was the group’s Rising Star in 2016. She joined Techenomics after graduating from the National University of Mongolia with a Degree in Petroleum Chemistry and quickly became a key member of the team with her initiative, flexibility, willingness to learn and strong communication skills.

Otgoo has progressed from a role as laboratory assistant to lab technician receiving, coding and analysing oil and lubricant samples, and calibrating laboratory equipment and then to heading up the team of Mongolians in the busy lab.

Chris Adsett says, “Women have played important roles in establishing the company and in its ongoing development, and we want this to continue with existing staff as well as with newcomers who can help us adapt to the ever-changing mining and industrial sectors.

“Without their input we would not be in the position we are today as an innovative and industry-leading independent provider of total fluid management solutions.”