Techenomics is up and running at Newman in Australia’s premier mining region of the Pilbara where ‘big’ is the name of the game for mining operations as well as for transport and port infrastructure.

The global fluid management company will use its independent specialist expertise, fully-equipped new laboratory with state-of-the-art analysis equipment and experienced staff to make sure that the region’s big mines and large transport networks keep moving effectively and efficiently.

Heading up the laboratory team is lab manager Kiky Millar, a recent Newman arrival from another major mining service centre in Balikpapan, Indonesia.

Although Balikpapan and its large coal industry and transport network is also serviced by Techenomics, and is the site of the company’s largest lab, the Pilbara role is Kiky’s first with Techenomics. 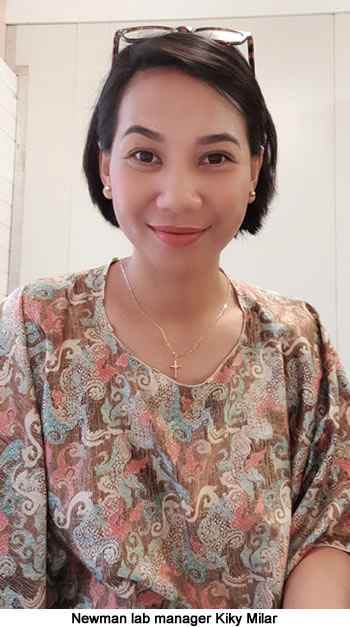 Kiky has relocated to Newman with her husband, who has work in the Pilbara with BHP, and two young children. She has had in excess of six years previous laboratory experience and has a Bachelor Degree in Chemistry as well as a Masters Degree in Environmental Science.

The Newman lab manager said: "I'm excited and happy to work in Australia. Newman is a very good town for us, the community here is awesome and it is very family-friendly.

“I love it here. I’m happy as long as my family is happy as well and that's the most important thing for me.”

From the new Newman base and laboratory, Techenomics offers a quick turnaround with services aimed at analysing oil and other lubricants to predict maintenance issues before they arise, thereby helping mines, transport and associated industries reduce maintenance and improve productivity.

Kiky, who will bring her dedication, strong work ethic, teamwork and leadership qualities to Techenomics, said she was looking forward to the new role in a new operation.

Her aims are to define best standards for lab work activities and continue implementing improvements as well as engendering positive communications between team members. She is also determined to maximise engagement with mining industry clients and familiarise herself with their operations so that decisions can be based on actual conditions.

“As Newman is a key service centre in Western Australia’s largest mining region, it is very important to establish a firm foundation, make strong connections and grow together,” she said.

Assisting Kiky and her team in the laboratory will be a female chemical engineer, also from Indonesia.

Techenomics International CEO Chris Adsett welcomes Kiky to the team and looks forward to working with her, laboratory staff and the company’s recently appointed Operations Manager – West Coast Brett Elphick to help ensure the Pilbara continues to play a key role in the economy of Western Australia and the nation as a whole.

Adsett said the company had been operating for more than 30 years and specialised in the mining space, which made establishing a presence in the Pilbara, a natural progression.

“We started in the Hunter Valley coal region centred on Newcastle and have grown steadily and now have a significant presence in the massive coal operations of Kalimantan in Indonesia.

“Techenomics has also been successful in Mongolia where we serve the Oyu Tolgoi Copper-Gold Project of Rio Tinto, along with other mines and other industries in the developing North Asian country.

“We serve mining, transport, marine and industry in other parts of Indonesia, as well as Singapore and Thailand and are establishing in Africa, including the continent’s east, south and west, areas which have a strong, and growing, mining presence.”

Adsett said continual optimisation and improvement of operations was vital for the Pilbara to maintain its position as a world-leading mining centre and at Techenomics this was at the very core of the business.

“We are constantly developing new technology and improvements to our services and products and this includes superior methods of gathering, interpreting and delivering data.

“As part of our development and commitment to enable clients to gain more from their oil and lubricants, we are exclusive distributors of Liquid Tungsten technology to the mining industry and we believe this product will make a major difference to mining and transport in the Pilbara.”