Sludge and corrosion in relation to soot build-up

Sludge and corrosion in relation to soot build-up

There are a number of reasons blow-by and resulting soot can form in various scenarios and understanding each of them has significant implications for engine maintenance.

Did you know that of the soot produced within the engine, just 29 per cent reaches the atmosphere through the exhaust pipe, with the rest being deposited on the cylinder walls and piston crown?

With soot retained in the engine, and mainly in the lubricant, 3 per cent is attributable to blow-by gases and the remainder is from piston rings scraping away soot deposits in the cylinder, which end up in the sump.

This is then transported around the engine where it can be entrained into component contacts.

Soot is carbonaceous particles generated by incomplete combustion of fuel. It is harmful to engines and if left to accumulate can impact on productivity through poor performing components and can also lead to breakdown.

Techenomics Australia laboratory manager Sahar Nazari provides the following information about the reasons for blow-by and soot build-up focusing on sludge and corrosion. 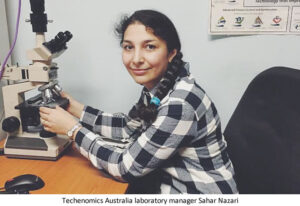 Sludge:
Particulate matters including soot particles are evident in the lubricant. The bonding of oil residues with solid impurities, water and acids causes sludgy masses to form when operating at low or high temperature.

This sludge may deposit on cool surfaces, where it causes little trouble, but can cause trouble by blocking oil-ways or by baking to a hard deposit in scraper-ring grooves and oil drain holes, thereby reducing the oil's effectiveness and increasing consumption.

Sludge formation is accentuated by inefficient combustion, particularly in association with piston blow-by and low temperature operation. Deposition of sludge is retarded, however, by dispersant additives.

Low-temperature sludge is typical in stop-and-go driving when an engine's operating state is under-cooled. If the engine's normal operating temperature is not reached, water and unburnt fuel produced during combustion can condense and bond with oil residues to form sludge.

High-temperature sludge primarily forms at high operating temperatures and consists of oil-insoluble reaction products from blow-by gases, nitrogen oxides and engine oil. In an engine, this type of deposit is particularly found on the valve cover (cylinder head) where it cannot be eliminated by an oil change with resulting danger to the crankcase ventilation system.

Along with engine characteristics and operating conditions, engine oil and fuel are factors that influence the formation of high temperature sludge.

Corrosion:
Different bearing alloys suffer corrosion under different conditions. Tin-based white metals, particularly in a slow-speed diesel engine, can form a hard and dark (almost black) brittle surface deposit when water is present in the lubricating oil. This has been found to be tin oxide, which is formed by conversion of the tin matrix of the lining by an electrochemical process, and becomes thicker with time. Layers as thick as 0.25mm have been found. Under these conditions, the bearing becomes prone to overheating and seizure.

Alternatively, due to the brittle nature of the layer, it can flake off the surface, leaving a generally pitted appearance. 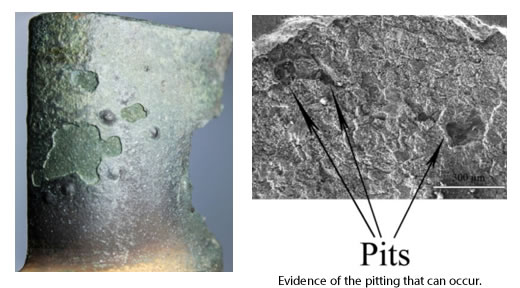 Copper-lead lining if exposed to a lubricating oil which has thermally degraded to form organic acids and peroxides; or become contaminated by sulphur containing fuel oils or blow-by of products of combustion of such fuels; or cooling water with antifreeze additives, is prone to corrosion of the lead phase of the lining and this can be either the cast or sinter type.

Such attack results in a porous, extremely weak, copper matrix which is easily fatigued by the dynamic loads applied to the surface.